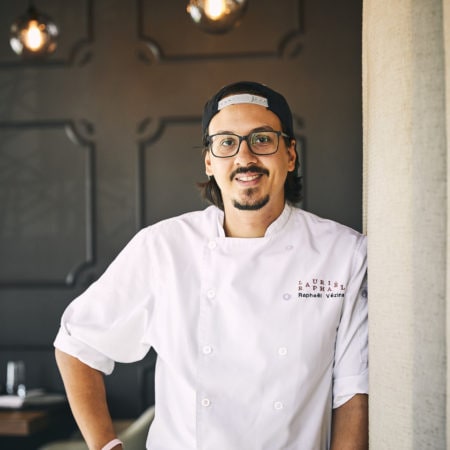 Raphaël Vézina touched a lot of bases—from Nice to New York to Barcelona—before coming back home and taking charge of the restaurant that bears his name.
Guided by his father and mentor Daniel Vézina, Raphaël was still in high school when he made his restaurant debut at Laurie Raphaël. Upon graduating in 2007, he left home to enroll at Lycée Hôtelier and Tourisme Paul Augier in Nice. Three years of study saw him interning at several internationally-known institutions including Barcelona’s Abac (among the 50 best in the world) under the direction of Chef Xavier Pellicer, and Michelin-starred Illucianes with Chef Angel Pascual. He also spent four months with Chef Dan Barber at Blue Hill Restaurant in New York.

In 2010, Raphaël returned to Québec with an advanced technological baccalaureate and all the skills required to become a restaurateur. His first management challenge: heading up the kitchens at Laurie Raphaël in Montréal. The same year, the Union des Côtes de Bordeaux made him a Wine Ambassador for Côtes de Bordeaux.
In January 2012, he went home to Québec City to take charge of the parent company’s kitchens.

As time went by, he developed his culinary personality and gastronomic vision. Without much further ado just a few months later, Daniel Vézina and Suzanne Gagnon undertook transfer of the firm to Raphaël, making him co-owner of Groupe Laurie Raphaël.

2016 marked a milestone in the company’s life, as the Vézina family embarked on a major renovation that amounted to a 360-degree turn, reflecting the young entrepreneur’s commitment to gastronomy. In March 2017, he and his father went to Europe to represent Canada at the Semaine de la gastronomie canadienne in Monaco. The event presented an opportunity to share his knowledge and love of Québec products with the students of the Lycée hôtelier de Monaco.

Raphaël is a spokesman for the Salvation Army Christmas Kettle campaign, providing help to families in need.

“Maple is a healthy and environmentally-friendly choice of sweetener. I love its versatility (I put it on everything!) and that it’s natural. And, as my father taught me, it goes really well with soya.”

“I remember quite well my very first times at a sugar shack with my godfather and godmother. I was really young, and we went by snowmobile! Maple, for me, is the expression of spring. A symbol of tradition, maple represents the resourcefulness and ingenuity of our people.” 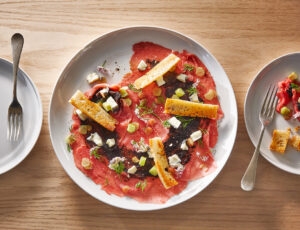 Beef Carpaccio with a Maple-Black Garlic Paste and Rhubarb 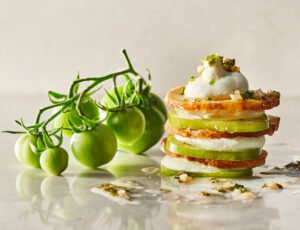 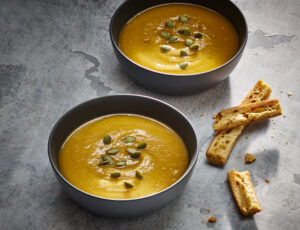